An electric fence basically refers to a barrier that is said to use electric shocks to deter animals and even people from crossing the boundary. Over the years, with the growing technology, electric fencing has been highly recommended as compared to the barbed wire fencing also known as the traditional form of fencing.

Electric fencing has proved to be more advantageous in a numbers of ways as indicated below; 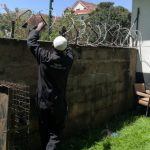 In a number of ways, electric fencing, despite having the numerous advantages also has some of its disadvantages which include;